Spain is waiting. The media is speculating, the social networks are boiling, many political circles are alarmed, others campaigning and lobbying, and it’s all because of a football match, but it has nothing to do with sport.

Tonight, FC Barcelona and Athletic Club de Bilbao will be playing in Barcelona in the presence of the King of Spain: it’s the Spanish King’s Cup final (Copa del Rey) and the King will hand the cup to the winner, but this is not why everyone is Spain is waiting.

FC Barcelona is a Catalan club, Athletic de Bilbao a Basque one. Catalans and Basques have a track record of whistling the Spanish national anthem in the presence of the king, any king. They have their reasons: some do not identify with the Spanish flag/anthem/politics, they do not consider themselves Spanish; others are separatists and would not miss a chance to express their strong desire for independence. They consider whistling the Spanish national anthem as an exercise of freedom of expression and an opportunity to voice their objection to Spanish politics and to the monarchic system in an event followed by the whole world.

On the other side of the battlefield (I mean the football field) are those who decry this attitude and describe it as an act of defiance to any code of conduct, mixing sport with politics and insulting the national icons of Spain. To them, whistling the flag (and in the presence of the new King) is an unimaginable and unacceptable lack of respect towards the rest of the Spanish people that love their ‘patria’ (homeland).

The debate acquired a new momentum following an unexpected (and unprecedented) twist: the authorities announced that both clubs would be sanctioned if their fans whistle the anthem. Other official opinions had called for suspending the match should this behavior persist. There is no lack of people from both sides of the argument that would gladly fan the flames.

The heated debate is already a trending topic in Spain, and once more, football proves it’s more than just a sport: football, politics, business and culture, they all mix despite the superficial arguments that claim otherwise. The big question, like always, is: where is the line between freedom of expression and abuse of other people’s freedom and rights? ‘The Law’, you might think. Well, not always.

I don’t know whether the fans would whistle and boo the national anthem or not tonight (most probably they will), but one thing I know for sure: after exactly 17 minutes and 14 seconds (17:14), Barcelona fans will sing ‘We want Independence’, like they always do at their stadium, the Camp Nou. The year 1714 is the year in which Barcelona fell to the Bourbon-supporting French Army. It’s a year that marked the destiny of Catalonia ever after, and it still hurts. 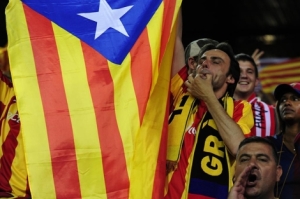 Following the fall of Syria’s Palmyra to ISIL and the reports ‎about the damage done to parts of the historic city, this ‎article in the BBC is a good reminder on the need to protect ‎heritage in times of conflict. Lessons from Mali, ‎Afghanistan and Bosnia.‎

Rescuing Palmyra: History’s lesson in how to save ‎artefacts
By Roland Hughes BBC News
• ‎21 May 2015‎

Islamic State militants took control of Palmyra on Wednesday ‎With Islamic State militants now inside the historic town of Palmyra in Syria, the ‎question, inevitably, is whether they will destroy the ancient ruins. ‎
As IS continues to sweep through parts of Iraq and Syria, damage to centuries-old ‎artefacts – because IS sees statues and shrines as idolatrous – is plentiful.‎
But history has shown that, when culturally important sites are under threat, people will ‎find a way to rally round and save what they can.‎
Artefacts have been saved in the face of war, natural disaster and genocide – often with ‎seemingly insurmountable logistics and threats to overcome. ‎
Similar efforts have taken place in Palmyra, too.‎
But how straightforward is it to save what others are determined to destroy? And what are ‎the crucial factors that can help save artefacts?‎

In 2012, Islamists seized the historic Malian city of Timbuktu. They started to destroy ‎mausoleums, and banned singing, dancing and sport.‎
Valuable manuscripts dating back to the 13th Century were under threat – and they ended ‎up being smuggled out of the city right under the Islamists’ noses.‎
It took a group of determined Timbuktu residents, who raised money to pay for bribes ‎and worked out when the militants slept in order to move the papers, mainly by boat.‎
Staff from two museums provided a safe house for the manuscripts in the capital, Bamako, ‎and helped smuggle them out of Timbuktu in a complex operation.‎
For the Mali manuscripts to survive, it took co-ordination, planning, bravery and more than ‎a little luck – in that the Islamists did not try to destroy them immediately.‎

Years of conflict and Taliban rule saw Afghanistan’s national museum in Kabul bombed and ‎looted to such an extent it was feared that nothing valuable remained.‎
But, to very few people’s knowledge, the museum’s director and four other men stored ‎‎22,000 of the most valuable items in the vault.‎
It was locked by five keys, one of which went to each man – or to his eldest child if he ‎died. Neither of the men said where the objects were stored – even when threatened at ‎gunpoint.‎
Some objects were moved into the presidential palace on the orders of President ‎Mohammad Najibullah, whose government fell in 1992.‎
A curator at the British Museum, where the objects went on show in 2011, said the men ‎were “undoubtedly unsung heroes”.‎

During the siege of Sarajevo in 1992, the city’s National Library was deliberately hit by ‎shell fire, and at least two million books and documents were destroyed.‎
Many people rushed to the library to save what they could, despite sniper fire from ‎surrounding hills.‎
But the fire also spurred the head of another library to take action. Mustafa Jahic led ‎efforts to smuggle more than 100,000 books out of his building in banana crates, ‎moving them between safe houses.‎
He also smuggled equipment through a tunnel near Sarajevo’s airport that allowed him to ‎microfilm rare documents.‎

What hope for Palmyra – and Syria?‎
The advance of IS towards Palmyra gave authorities plenty of warning – a factor that is ‎crucial when it comes to saving priceless objects.‎
Maamoun Abdulkarim, the director general of Syria’s antiquities and museums, said that ‎hundreds of statues and other objects had been moved from Palmyra to safe-houses in ‎Damascus.‎
‎”But how do you save colonnades that weigh a ton?” he said. “How do you save temples ‎and cemeteries and, and, and?”‎
Similar work is being done elsewhere in Syria – largely to take objects out of looters’ ‎sights.‎
The 11th Century minaret of the Umayyad mosque in Aleppo was destroyed in fighting ‎
Cheikmous Ali is an archaeology professor and founder of the Association for the ‎Protection of Syrian Archaeology (Apsa), that monitors damage done to Syrian ‎archaeological sites.‎
‎”In Aleppo, in particular, there are people who have done some amazing work to protect ‎monuments,” he said.‎
‎”There are laws that allow you to move artefacts abroad if they are under threat. You have ‎some areas, like Idlib and its museum, that aren’t under government control.‎
‎”But everything in its museum can’t be moved to, for example, Turkey, as anyone who ‎moves it would be considered a thief there and arrested. So everything is still there in ‎Idlib.”‎
The key to saving future archaeological sites is co-ordination, careful planning and an ‎assessment of the safety of the site and of safe houses, said Zaki Aslan, a director of ‎Iccrom, a UN-backed body that works to conserve cultural heritage.‎
He also urged anyone who wanted to protect rare objects to maintain contact with ‎authorities and to catalogue them thoroughly.‎
‎”One can feel helpless but we should try to do something,” he said.‎
‎”Unesco has called for people to co-operate, for even the people in the conflict to find ‎ways.‎
‎”It will be a great loss if even some of the parts of Palmyra are lost. Not just for Syria, but ‎for the world.” 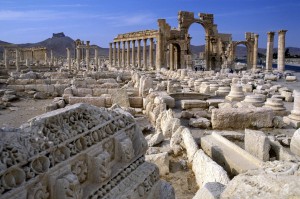 Olot is a charming little city in Girona, Catalonia. More than anything, it is famous for its volcanic craters which form part of the Garrotxa Volcanic Zone Natural Park, the most important such park in Spain. On a visit a week ago, we started with the crater of the Motsacopa Volcano, now all green and serene. The hill commands great views of the city and the other volcanoes. After roaming around –and down- the crater for some time (the volcano has been extinct for 10,000 years), it was time to admire Olot’s modernist architecture (Art Nouveau), specially Casa Gaietà Vila (1901) with its clear medieval air, its rich colors and its fantastic animals and plants worked in iron. Casa Gassiot (1912) is another charming building with beautiful wrought iron and gothic inspiration, and so is Casa Solà-Morales (1916), whose romantic façade was reinvented by the Catalan genius Domènech i Montaner.

In front of the neo-classical Church of St. Esteve, we enjoyed some castellers (human towers, a Catalan tradition listed on the UNESCO Intangible Heritage List) before trying Olot’s interesting ‘volcanic food’. The city’s tree-lined promenades and parks, its labyrinthine alleys and pleasant squares all invite you to explore further, but the real deal was awaiting a few kilometers away: the splendid natural reserve of La Fageda d’en Jordà, with thick vegetation and a forest of beech trees that grow at an exceptional height on cool lava from the nearby Croscat Volcano. As green as it is, one can only wonder just how colorful all these leaves would be in autumn!

Enjoy the photos, and enjoy Olot if you get the chance! 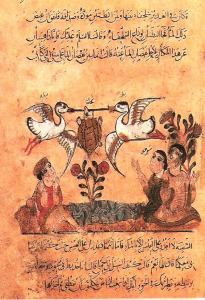